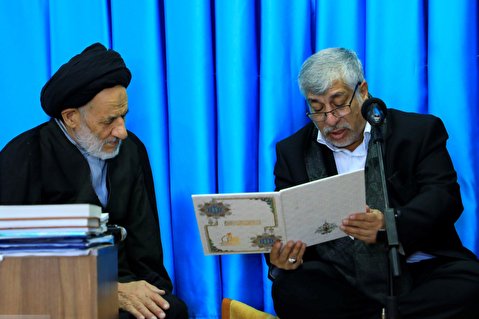 Majid Namjoo in a meeting with deputy of Shia’s leader (Supreme leader) in South Khorasan stated: 14 years  of HOROSH activity are passed in Iraq.

Firstly, repairing the holy shrines were on the table, then the development projects for the welfare of pilgrims, who are predominantly Iranian, were on the agenda.

"What we are doing in Iraq in the cities of Najaf, Karbala, Samarra and Kazemeyn is reconstruction work and serving to Ahle-Beint(PBUT)," he said.

Vice President of HOROSH added: " Currently our greatest work is the process of constructing the holiness Zahra(PBUH) courtyard, which has an area of 220,000 square meters. The 100,000 square-meter pilgrimage space has completed and non-pilgrimage space will be done by the end of the year.

Namjoo said that There is another major project that is in progress, the Prophet Zeinab's Courtyard(Crypt)  project, in Karbala. He added that this project is the first phase of a bigger project named Imam Hussein(PBUH) holy shrine enlargement in 5 hectares, which has several parts. This area called Tale Zeynabiyeh, which is the battle court of Imam Hussein(PBUH) against his enemies.

“We started this project in the most sacred place of Karbala, which is the second biggest work after holiness Zahra(PBUH) Scene.

Despite all financial matters, people donations have a good trend, still  we need the help of the people. The government has already helped us although  due to economic issues, this aid has been reduced to 1/3.

Namjoo reiterated: South Khorasan has a devoted and committed people and this province is among pioneers regarding to donations and vows.

The representative of the Supreme Leader in South Khorasan also stated at the meeting: "You have to be thankful to the God because of this precious responsibility given to you. The love of the Imams is the greatest asset that puts human time, thought and effort in this direction and it is valuable.

Ayatollah Seyed Alireza Ebadi says that if pilgrims had difficulty along this path, their problems are minimized by your efforts which is a very good achievement. He added: you belong to Imam Hussein (PBUH), you are Imam Hussein,s(PBUH) workers, you should not trade it for anything else.

"The subject of proximity cannot be traded for anything else today," he added. Providing welfare for pilgrims is important, but what closer to

Imam Hussein (PBUH) goals is the Arbaeen rite who has internationalized Karbala and Ashura, and has angered the enemy and It is the widespread Jihad that transforms the world, soon or after.